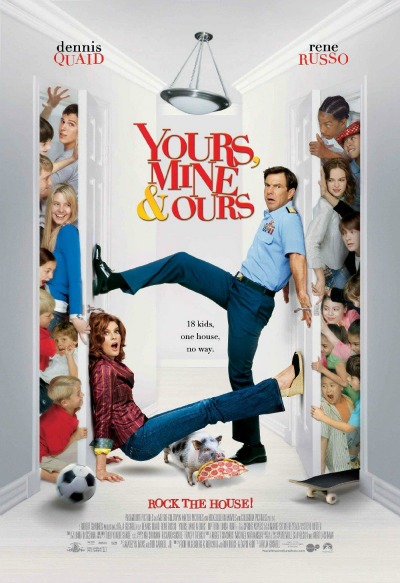 This is one of my earlier reviews.  My opinion on this has changed from a 3 out of 5 (average) to a 2.5 (decent).  I would still recommend it for those who want a family comedy with humor for all ages.

There was an old woman who lived in a shoe … she had 10 kids and not a clue what to do. Well, actually, in the new movie “Yours, Mine, and Ours,” she (Rene Russo playing Helen) was young and beautiful and perfectly happy with her colorful, artsy life. Then she met a military man (Dennis Quaid playing Frank) she used to date in high school and after that it was love at “second” sight! He has 8 kids of his own!

Then Helen and Frank decide to get married. They move into a lighthouse that needs a light. And it needs to be rebuilt. The kids aren’t happy because their parents are very different. Frank’s kids are military material and Helen’s kids are messy-messy free-free. Frank starts giving the kids bathroom schedules and other rules that are new to Helen’s kids because they’ve never known what it is like to be in the military. At one hilarious part, one of Helen’s kids pulls the fire alarm to get all of Frank’s kids out of the bathrooms!

One night the kids decide to try to break their parents up by playing tricks on them. They squirt toothpaste all over Frank’s sink and organize Helen’s studio and make it colorless, and then finally they throw a big party to finish them off while Frank and Helen are away at a military party. Their plan to split their parents up works, and Frank decides to take a job as the commandant of the entire Coast Guard. There’s just one hitch — he has to leave the family and do his job in other places.

What I really liked about this movie is that it is full of laughs like when they paint the family pig blue. I didn’t like the fact they want to split their parents up! Kids of all ages will like this movie because it has a little of everything — music, comedy, and romance. Rated PG for mild crude humor. I rate it PG for “Parenting Greatness.”