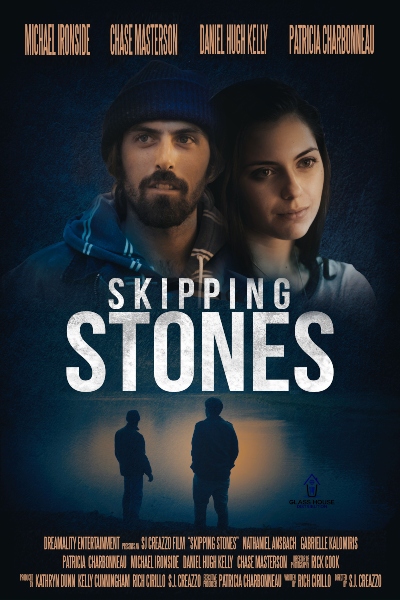 Skipping Stones is the kind of movie that will make you want to hug all of your family members when it’s over.  It’s a tearjerking drama about grief and survivor’s guilt with a great cast that pulls on your heartstrings and ends on a bittersweet note that will stick with you after it’s over.  In a landscape where large-scale blockbusters are rapidly becoming the only game in town from larger studios, I was happy to see a smaller, more intimate film like Skipping Stones and feel its impact.

David (Nathaniel Ansbach) returns home 8 years after a tragic accident that ended in the death of his best friend Bobby as well as his own suicide attempt.  With his brother (Michael Spellman) and parents (Michael Ironside and Patricia Charbonneau) walking on eggshells around him, David yearns to process his grief and start to move on.  That seems possible when he befriends Bobby’s younger sister Amanda (newcomer Gabrielle Kalomiris) whose dysfunctional parents (Daniel Hugh Kelly and Chase Masterson) are still grieving and taking their frustration out on her.  While the two begin kindling a healing friendship, secrets arise that will challenge everyone to confront their pain head-on.

Skipping Stones takes its time establishing all the characters and their relationships with one another, thus making the emotional moments later all the more impactful.  I like the sweet-natured friendmistry between Kalomiris and Ansbach and both sets of actors playing their parents do well to make their characters feel authentic.  The soundtrack also adds to the mood of certain scenes and the ending is devastatingly bittersweet.  Most of all, I appreciate the film for pointing out that grief impacts everyone differently and that some may take longer to process it than others.  Bring a tissue box, but I highly recommend this.  Skipping Stones is a well-done tearjerker with good performances and a strong finish.  See it.

Would likely be rated R for Language