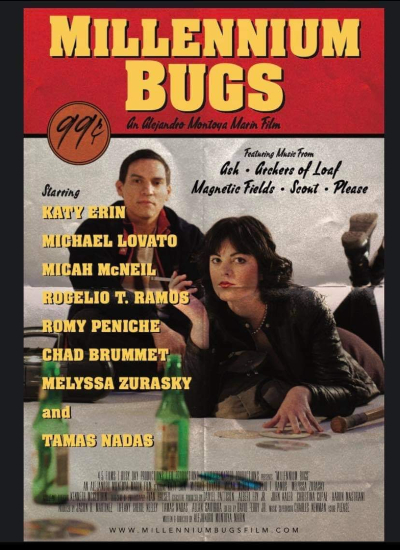 Thank you to Alejandro Montoya Marin for reaching out to me for this review.

Thank goodness for Alejandro Montoya Marin’s new YTK dramedy Millennium Bugs.  In 2020, Marin’s film is both a nostalgic time capsule and a reminder that the world’s reaction to uncertainty hasn’t changed much in 20 years.  It’s funny, stylish, and surprisingly sincere, reminding us all to enjoy the time we have on Earth.

Kelly (Katy Erin) and Miguel (Michael Lovato) are days away from the supposed end of the world, Y2K.  While the world around them is crumbling, the duo try to live it up as much as possible while also dealing with their personal problems and eventually coming to grips with their impending doom.

Millennium Bugs is surprisingly fun and zippy given its dour backdrop.  Writer-director Alejandro Montoya Marin balances buoyant energy with grounded drama, the 90’s references are well-placed and natural, and the characters feel authentic.  Katy Erin was reminiscent of Emma Stone in Easy A and Ellen Page in Juno, but felt less exaggerated.  Lovato has a natural likability onscreen and the duo’s friendship feels genuine.

Marin’s stylistic touches and direction are similar to Edgar Wright (Shaun of the Dead), but he never lets them overtake the movie.  Combining wackiness with quasi-realism is no easy feat, but Millennium Bugs accomplishes it surprisingly well.  The 3rd act is noticeably (and appropriately) darker in tone, but doesn’t feel jarring and ends the film on a hopeful note.  Millennium Bugs is a funny and stylish romp with grounded characters, raunchy humor, and an unexpectedly hopeful ending in a year when we all need a little light in our lives.  Let these Millennium Bugs sting you.

Likely Rated R for Language and Drug And Alcohol Use