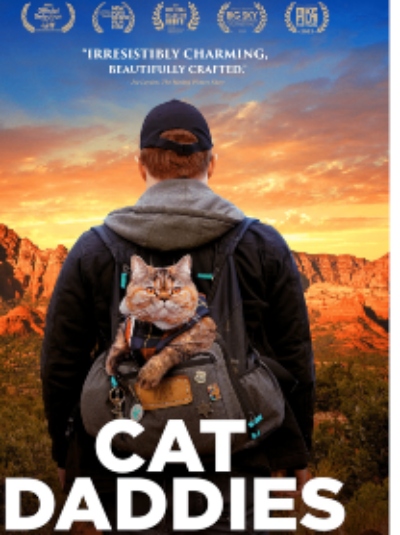 I grew up loving animals.  I’ve had various dogs and cats throughout my life and considered every one of them family regardless of how long they stayed with me.  Therefore, I found the new documentary Cat Daddies to be an adorable watch.  The doc shows the positive impact these fur babies have on people and how they’ve been inspired to better themselves and the world around them with the help of their cats, a noble pursuit if I ever saw one.  Cat Daddies is chock-full of cute kitties, but in showing the effects they have on their owners, it should leave the viewer purring with uplift.

We follow various cat-owners around the United States over the year 2020.  Some of these men are firefighters, actors, truck drivers, internet stars and more, but they all have one thing in common: an adoration of feline companions.  As the times become more turbulent, each of these men keep their spirits up through the gloom with the undying love of their loyal and loving fur babies.

Cat Daddies made me wish I had enough time and money for a cat of my own.  While some stories get more time to shine than others, the subjects all do a good job explaining their love of cats and what their own kittens do for them personally.  The film touches all too briefly on the shifting perception of masculinity and how it’s becoming more widely accepted for men to show affection for cats, but the main point is to showcase that cats can do different things to different people.  For some, the cat acts as an emotional support animal, for others, a loyal companion, and a few have gained internet fame because of their furry friend.  Of course, this means we get a ton of clos-ups and awwww-worthy shenanigans from the cats that should warm the hearts of most animal lovers out there.  Cat Daddies shows the positive impact of feline ownership with plenty of adorable kittens to go around.  See it.

This film is not yet rated.  It will be in select theaters starting October 14th.