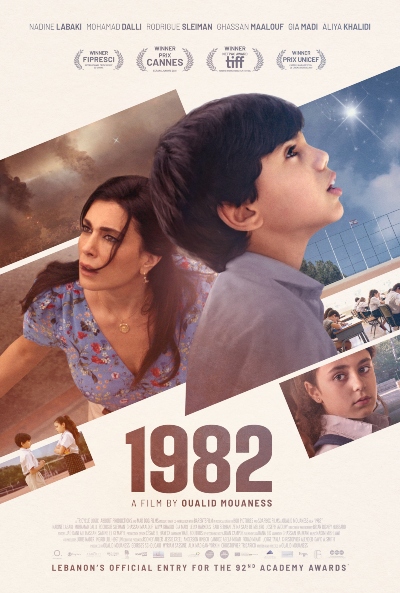 I have seen few films this year as resonant as 1982.  The directorial debut of Qualid Mouaness, the film takes place over one initially normal school day in 1982 Lebanon that slowly turns to one of panic, fear, and uncertainty as a war between the Isarelis and Syrians makes its way to the school’s front door.  Add strong, grounded performances from the entire cast and an unwavering sense of realism, and 1982 adds up to a thoroughly intense, emotionally gripping 90 minutes that I won’t soon forget.

Young student Wissam (Mohamed Dalli) wishes to gain the affections of older classmate Joanna (Gia Madi).  Supported by his best friend Majid (Ghassan Maalouf), Wissam attempts to make his move with little success, all the while he and the rest of the school are undergoing exams.  However, elsewhere in the school, the teachers are becoming aware of a war between the Syrians and Israelis that is inching its way closer and closer to school grounds.  When that war disrupts the daily goings-on of the school, all of the teachers must maintain their own composure as the world falls apart around them.

Much like Titanic, 1982 aims to tell a love story in the midst of a real-world event.  I appreciate how the film lulls you into a sense of mundane security by focusing on that, the children blissfully unaware of the impending war.  There’s a sweetness to the scenes of the kids going through their day-to-day school activities, making the eventual shattering of peace extremely effective.  Nadine Labaki and Aliya Khalidi are standouts as two of the teachers having to balance their increasing fear of the situation around them with trying to remain calm in front of the kids, and I like how the film switches back and forth between the teachers’ and kids’ perspective and making the war outside as scary and uncertain to us as it is to them.

I will say that by the end the romance was slightly less engaging given the greater drama around it and the ending confused me, but otherwise this is excellent.  1982 is an emotionally intense drama and a great directorial debut that grips you hard and doesn’t let go.  See it.

Likely would be Rated PG-13 for Thematic Intensity