2 out of 5 stars (has some good moments, but is overall bad) 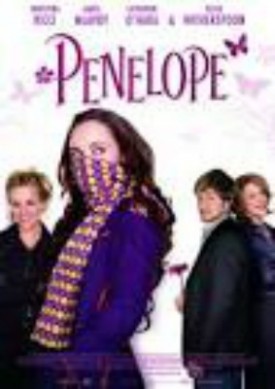 Penelope (played by Christina Ricci) is a girl with a pig snout for a nose. Many years before she was born, a witch put a curse on her family: the next newborn girl would have the face of a pig. The curse would only be broken when “one of her own kind” would come to love her for who she is.

Penelope’s mother Jessica (Catherine O’Hara) and father Franklin (Richard E. Grant) have kept her inside their mansion ever since a news reporter named Lemon (Peter Dinklage) tried to run a story about Penelope’s pig face. Only men who might break the pig curse are allowed to see Penelope. They always run away, however, because of Penelope’s pig snout, leaving her sad and alone.

Lemon teams up with Edward (Simon Woods), a man who also tried to tell people about Penelope to no avail. The two get a broke gambler named Max (James McAvoy) to take a picture of Penelope to prove to the world they aren’t crazy. Yet, instead of getting a picture of Penelope, Max unintentionally makes things worse by making Penelope run away, driving her mother crazy.

Will Penelope get a real nose? Will she come back to her mother? Will she fall in love? The ending surprised me and I hope it does the same for you.

However, I thought this movie stunk like a pig pen. Some parts kind of bored me, and the film wasn’t a comedy like I was expecting. There were a few funny moments here and there but not enough. I don’t think little kids will like the grown-up parts of the movie after Penelope runs away, and I’m not sure who is supposed to like this film.