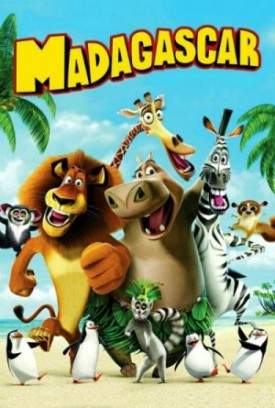 First an island, now a movie; about 4 animals (and 4 penguins.) Marty (played by Chris Rock) wants to see what it’s like in the wild. His best friend Alex, the lion, (Ben Stiller) wants to stay in the zoo and do acts for the people. Meanwhile, the giraffe, Melman, played by David Schwimmer, is always nervous. Gloria the hippo, voiced by Jada Pinkett Smith, loves the food at the zoo. When Marty runs away to find the wild on his tenth birthday Alex, Gloria, and Melman take off to find him.

It’s a crazy ride through New York City for the animals, especially Alex, because there are a lot of people who are afraid of him. (Except for one old lady who keeps hitting him with her purse.) This movie is hilarious and 10 year olds and other kids that can handle some cartoon humor will really like it. The film is rated PG for some mild language, crude humor and some thematic elements. I think this meant when Alex had a dream about eating steaks-you’ll have to see it to know what I mean!