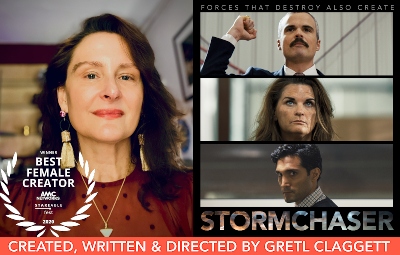 Thank you to Gretl Claggett and Cher Culver PR for this interview.

You might not know Gretl Claggett’s name, but she’s been making waves with her short film Stormchaser.  Showing at over 50 film festivals, the short has accumulated several awards including AMC Network’s Inaugural Best Female Creator Award at Stareable Fest 2020 and Best Writer and Director in the 2021 New York Women in Film & TV, among many others.  I recently caught up with Gretl to find out about her inspirations for Stormchaser, the creative process behind it, and which Hollywood stars she’d love to work with in the future.  Check out the interview below.

1: How did you come up with the idea for Stormchaser?

The seed for the idea was planted when a friend told me she was dating a guy who’d lost his big job during the Great Recession and was now working as a door-to-door “storm door” salesman. This conjured black-and-white images from the Maysles’ documentary, Salesman, about door-to-door bible peddlers in the 1960s. Surely, I thought, this daily grind was a thing of the past. But as I did some digging, I discovered it still exists; and that many contractors targeting weather-torn areas this way are called “storm chasers” — instead of “ambulance chasers” — because of their predatory practices.

As I learned more about these “storm chasers,” I was compelled to express my own sardonic commentary on what I’d experienced growing up in small-town Tornado Alley, plus selling incentives as the lone woman in an old boys’ club: America’s culture of greed, its celebration of bad behavior, and the rise of Disaster Capitalism that systemically preys upon the most vulnerable suffering from man-made and natural catastrophes.

I first crafted the core story as a poem, “Storm Secrets,” which appears in my poetry collection, Monsoon Solo: Voices Once Submerged. In that version, Don Stuckey is the storm chaser. After writing the poem, I thought I’d said my piece, but something about the storyline kept nagging me. So, I started the screenplay — expanding the narrative and eventually gender flipping the protagonist.

2: How did you go about balancing the dark humor and comic exaggeration with the drama of the pilot?

One of my favorite quotes comes from Lord Byron: “And if I laugh at any mortal thing, ‘tis that I may not weep.”

I’ve lived through a lot of heavy, hard stuff in my life…and humor — especially dark humor — has helped me to not only survive but also to thrive. Even as a child, I “got” dark humor and it came naturally to me when I was an actress. That said, after I wrote the script for Stormchaser and shifted into wearing my Director’s hat, I thought, “What the hell have I done to myself?!” Because, as you know, it’s a razor’s edge to get the tone just right so that the audience buys into the world, and one minute they’re laughing and the next they’re truly experiencing the character’s authentic dilemma in a deep, dramatic way.

Much of the success in balancing the dark humor, comic exaggeration and drama came with casting the right actors to embody the roles, and then working with them to build emotional, actionable backstories while also creating a safe space for them to play during the shoot. As a director, I was always working to create a container for the cast and crew that balanced freedom with strict precision. Sometimes I’d push them to go bigger, then pull them back into nuanced restraint. I believe grappling with the tension between all these polarities helped to create moments that sang.

3: When writing for Smyth, did you pull from personal experiences?

I worked in a male-dominated salesforce for a decade, so Flip Smyth was definitely inspired by a number of men and women I’ve known. But I also pulled character traits from public figures — even giving Flip a handful of verbatims from one of our most infamous, controversial leaders today. That said, no matter how much I pull from personal or political observations and experiences, I always aim to get into that “flow” state in the writing and directing when the character takes on a life separate from me — surprising me as he interacts with other characters in the film’s imaginary world. That’s when things get super fun and juicy. That’s when the magic happens.

4: What inspired you to go into filmmaking?

My father collected 16mm films, so every weekend, as I was growing up, he showed me double features of the classics on a big screen in a home theater he’d built. That’s how he and I bonded. Plus, I acted in professional summer stock starting at the age of 7, alongside my mother, and that’s how she and I bonded. I’ve also consistently written poems and sketches/monologues from a very young age, so storytelling has always been a part of my day-to-day life. Even so, I pursued acting, writing, producing and creative direction before delving into the process of making my own films. But every art I’ve practiced and every experience I’ve had has prepared me to make films — and what I love most about filmmaking is the fact that I get to merge all my passions and skills into a single art form that’s one of the most potent and powerful transformers on the planet.

5: Who’s your favorite director at the moment?

That’s tough. There are many directors I learn from and greatly admire. But I guess I’d have to say Susanne Bier. I love how she — as a writer and director — tells complex, intimate stories juxtaposed seamlessly against global, socio-political issues. She’s a master at getting natural, nuanced, powerful performances from her actors while also capturing incredible, organic visual metaphors. She’s badass in the realms of film and television.

6: Is there anyone in Hollywood you’d love to work with someday?

Hm, again hard to boil it down to just one person…but I’m currently writing a dramedy script with a female protagonist that I think Shailene Woodley could have fun tearing up. I love her commitment to the craft and her authenticity.

You can check out Stormchaser in late May 2021 at the FILM at the Downtown Urban Arts Festival screening at the Tribeca Film Center in New York City.  Claggett is also developing Stormchaser as a long-form narrative series.  You can read my review of Stormchaser here.